I have a massive apology to make to the staff at Doncaster Air Museum who I offered to build this kit for. It stalled not long after the original posting in July 2014 and was put to one side, and I’m embarrassed to say it stayed there, the daunting prospect of all the rigging a bit much. A lame excuse really as I have experienced far trickier, but I found it hard to pick up again. Having looked at it recently I’d forgotten how advanced the build was, so I aim to complete the model as soon as possible. It’s a fine looking plane and I’m sure that once the wings are together I’ll be a lot happier about completing it. 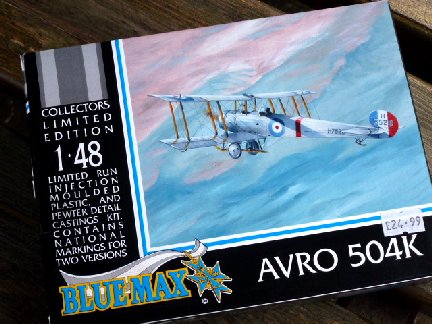 This model has been on the bench for around a month now, and quite a bit of time has been spent on it in preparation. Parts have ben taken off the thick gates with a razor saw, rubbed down, and fit their fit ensured. It is a limited run kit and there is a bit of re-shaping here and there, notably the two halves of the fuselage that need to be levelled in order for them to fit flush. The same goes for the bag of white metal parts, which in keeping with the rest of the range are well cast but do need some small seam lines removing. Control surfaces have been separated, and holes drilled ready for the mass of rigging. I also replaced the engine for one from an old Roden 1 1/2 Strutter as this was a bit more detailed and it had some phtotoetched pushrods which saved me a lot of scratch building bother.

There’s plenty of scope for detailing the cockpit, but given that I’ve wanted to press on with this I’ve limited any additions to new control panels using photoetch bezels from the spares box, seat belts from an old Eduard set, and some cushions for the seats from Magic Sculp. Some thin wire was also used to simulate the bracing wires. 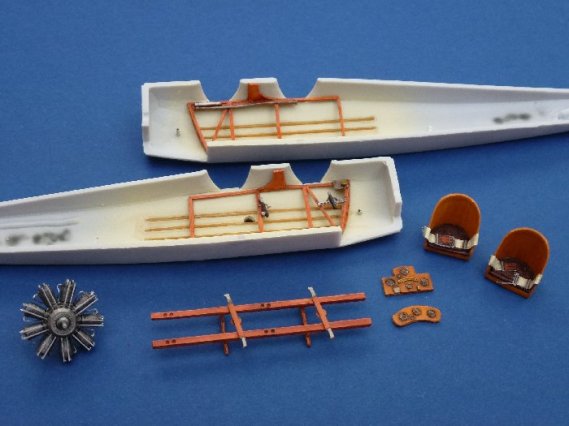 It’s only when this starts happening that I get any sense that things are moving forwards, and once the cockpit is in place things are coming together. Spending time priming parts yesterday meant that I could get a good painting session in today, using various brown and ochre oil colour shades for plywood effects. Using Winsor and Newton’s Liquin to thin the paint quickens the drying time, and in the heat of the conservatory this means overnight at the moment. Details are picked out in Valejo acrylics. The control panels were sealed with a brush stroke of Johnson’s Clear before this washes of dark brown oil were applied to add definition.

Once all the components had been safely sandwiched between the two fuselage halves there follows a bout of sanding and filling, something that I expected with a limited run kit like this. To be fair, Chris Gannon’s Blue Max kits were pretty good in this respect though the parts are often thick and the fuselage halves require a few millimetres taking off them so they mate up squarely. I can never usually get this right so a bit of filler is often needed.

My paints of choice generally tend to be Tamiya, but I do use Misterkit acrylics for WW1 models. Unfortunately I was at the bottom of my pot of British Clear Doped Linen, and although there are massive interpretations of PC10, I’ve always felt their shade a little too grey for my taste. I decided therefore to mix a batch of both from Tamiya paint.

The Clear Doped Linen was quite straightforward as I had some left in the pot to match my mix. I’m afraid my approach wasn’t very scientific and I just added amounts of paint until I got it right, but as an approximation it worked out as follows:
15 parts White XF-2
3 parts Earth XF-52
4 parts Deck Tan XF-55
1 part Yellow XF-55

Many learned words have already been written about the interpretation PC10 and PC12, but my feeling is that PC10 is somewhere between brown and green, and I used an equal mix of Olive Drab XF-62 and Brown XF-10 as my starting point. I then added small amounts of Yellow Green XF-4 and Desert Yellow XF-59 until I felt I’d got the mix right. I also mixed a lighter version with added amounts of Desert Yellow and Yellow Green to use for highlighting surfaces and accentuating the rib tapes. 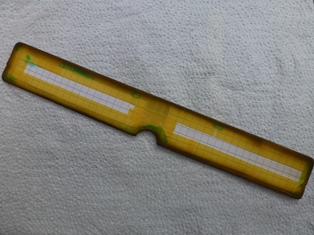 I hate masking – it’s one of those things that takes a disproportionate amount of time to do compared to the process of painting and its eventual removal. I think I spent about three hours on the masking, 20 minutes on the painting and 5 minutes taking the tape off, but unfortunately it’s absolutely necessary if you want to accentuate the tapes.

The photos above show the masking process using a lot of 0.75mm masking tape to mask off the ribs once the base coats of Clear Doped Linen and PC10 have been applied. Tamiya Smoke X-19 was used to post shade linen whilst the lighter mix of PC10 over the original mix. Once the masking tape was removed a light airbrushing of both is applied to subtly blend the surfaces together and avoid a stripey finish.

With everything going pretty much to plan I tucked the various interior components into position and glued the fuselage halves together. A small amount of filler and rubbing down was required but no more than expected. First paint applied was the Clear Doped Linen. I masked off the rear part of the fuselage and sprayed the front with Tamiya Gloss Black. To give the fuselage linen a slightly dirty, used appearance I sprayed irregular patches of thinned Tamiya Smoke over the surfaces, then gave all parts of the model a couple of coats of Johnsons Kleer to accept the decals. I found some Avro 504K logos on the Internet and printed them on to white decal paper. I ought to say at this point that I intend to model an aircraft that belonged to 47TDS based at Doncaster in August 1918, this particular machine requiring the designation D7771, which I was able to replicate using some basic computer skills and clear decal paper.

I added the roundels supplied with the kit, only to later realise that it would be unlikely that the fuselage roundels would be outlined in white (the kit has one option finished in PC10, standard practice on this finish), after I’d applied them to the model. I wasn’t initially worried about this because I had two sheets of Pegasus 1/48 roundels and I thought that they could easily be removed and replaced. Two problems though – firstly, the sheet of decals had none the same size, and secondly, the kit decals were some of the best sticking I’d ever used – the image below shows the result after rubbing down with micromesh (this was after I’d tried removing them with some very sticky tape). 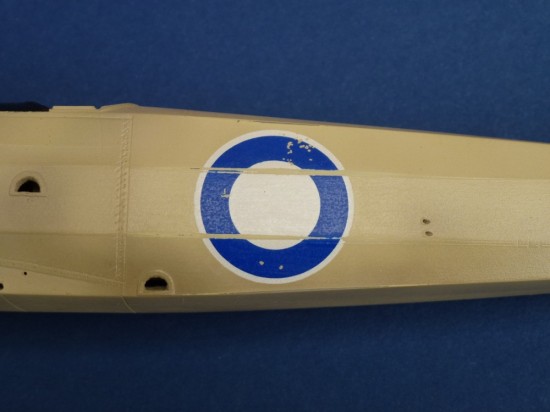 The only answer was to mask off the roundel area, paint it white, and fortunately I was lucky enough to find two the correct size amongst some spare decals.

This is the bit that I like! Studying the photographs, D7771 had a certain amount of castor oil staining on its fuselage, something replicated with washes of thinned Burnt Sienna oil paint. Further washes darkened with black paint were applied to the laced areas, something that the kit captures very well, panel lines and footsteps. In spite of the limited run nature of Chris Gannon’s kits I have always been impressed by the overall quality of the finished models.

The Lower wings are now attached, with some oil staining added.